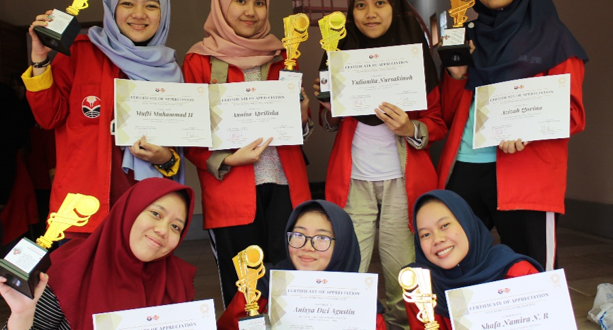 As the closure of the SA-IPSE 2019/2020 period, Human Resource and Organization Development (HROD) Department conducted an annual event to give sweet closing memories for all the members of SA-IPSE which is Malam Keakraban (Makrab). The event was held on Saturday to Sunday, 8-9th February 2020 at Kayas Family Guest House, Parongpong.

This period’s Makrab is started with Upgrading 2, themed Conflict Management. The sharing session was led by Dyantie Nur Azizah (IPSE 2016) and Arsanti Satriani Salim (IPSE 2017). On this Upgrading, all the audience, especially IPSE 2018, are expected to learn some new strategies to overcome several and typical conflict that usually happened in this student association for a betterment of this organization.

Next activity, we had fun by playing two games. The first one is jump&shoot, where everyone in a group should jump and be in the frame of the camera to take a picture of them. Second game is group spelling bee. The crowd and enthusiasts were so real!

To warm the cold night, SA-IPSE Special Awards was held as the peak of the night. Several nomination was given to appreciate the contribution of the members during this period. That night were also filled with the last best yet unique performance of each departments showed to amuse all of us. Some were dancing, singing, and role-playing. An after movie were played to bring back the memories of the joy, sorrow, and struggle of all the members throughout the year. After all of the laughter and flashback, we did a barbeque night to deal with the midnight starving.

The next morning was a sport day. Relay game and dodge ball were played to stretch our body. That was a joyful activities!

Last, an appreciation for the best staffs from each department was given as the form of gratitude after having outstanding persons in SA-IPSE like them. Hopefully, the next period will produce another contributive and marvelous individuals to SA and to the world!

Finally, this is the end for Kabinet Reaktor Peradaban. The period will actually be officially over at the Student Conference at 22-23th February. Thanks for everything, SA-IPSE 2019/2020, it was nice to have each other. Au refoir! [Arsanti]